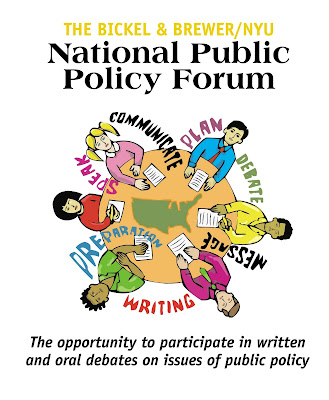 The 2008-09 Bickel & Brewer/NYU National Public Policy Forum (NPPF) is coming up next weekend, the only international contest that provides high school students with the opportunity to participate in written and oral debates on issues of public policy.

One hundred eighty-two teams registered for this year’s competition. Writing on either side of the contest resolution, public and private secondary school teams submitted essays on the public policy topic, “Resolved: The United States federal government should substantially increase alternative energy incentives in the United States.”

From those essays, Qualifying Round judges selected 32 schools to write on the same topic in a single-elimination contest. From this process, four teams emerged: Bellaire High School—Bellaire, TX; Glenbrook North High School—Northbrook, IL, Plano Senior High School—Plano, TX and Deer Park High School—Deer Park, TX. These four schools recently competed in a final written debate and have earned an all-expense-paid trip to New York, to participate in the first round of oral debate.

The semifinal and final rounds will be webcast from the Edwin Lawrence Debate Theater at http://www.uvm.edu/debate_theater/
YOU MUST HAVE QUICKTIME 7.0 OR HIGHER INSTALLED.

WEBCAST SPONSORED BY: DEBATE CENTRAL, UNIVERSITY OF VERMONT AND THE WORLD DEBATE INSTITUTE

For more informtion, go to http://nppf.net
Posted by Alfred Charles Snider at 10:56 AM No comments:


Debate Championship Comes to University of Vermont from Alfred Snider on Vimeo.

On April 3, 126 pairs of debaters from colleges and universities circling the globe converged on the UVM campus to compete in the 2009 U.S. Universities Debating Championship. The teams faced off for three days on a range of topics, from the merits of banning imported seal products to the effectiveness of stimulus plans.

The style of debate — the world debate format — matches four teams of two against each other to argue a topic they've only discovered just fifteen minutes before the round begins. During that fifteen minutes, debating partners are allowed only to speak with each other, and not access the internet, in order to pull together their fourteen combined minutes of argumentation.

UVM, this year's host of the fourth annual tournament, submitted several teams in the competition, and junior Sam Natale and senior Lucas Caress advanced to the semi-finals. Harvard University won the competition, debating in the final round in favor of outlawing handguns.

Watch the above video to learn more about debate, and see footage from the tournament.
Posted by Alfred Charles Snider at 9:56 PM No comments:

Thanks to Eva Sollberger and Seven Days Vermont for this video.
Posted by Alfred Charles Snider at 2:23 PM No comments:

This House would force feed anorexics.

Thanks to Nicole Colston for the video.
Posted by Alfred Charles Snider at 7:44 PM 3 comments:

News Story about US Universities

Thanks to WCAX-TV for this story.
Posted by Alfred Charles Snider at 5:01 PM No comments:


Debate - BP Undermine the ICC from Alfred Snider on Vimeo.

Semifinal debate at US Universities Debating Championship 5 April 2009, held at the University of Vermont and sponsored by the International Debate Education Association and QatarDebate.

Quarterfinals at US Universities, 5 April 2009, held at the University of Vermont and sponsored by the International Debate Education Association and QatarDebate.

Alfred Snider
University of Vermont
debate.uvm.edu
Posted by Alfred Charles Snider at 11:21 AM No comments: