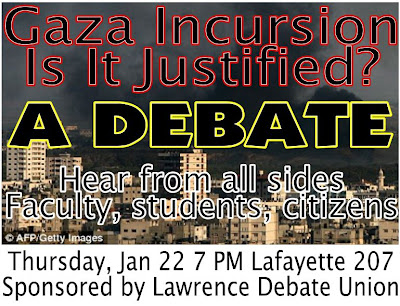 This public debate was held 22 January 2009 at the University of Vermont. Sponsored by the Lawrence Debate Union, the debate took place in the WUDC format.

The motion was: This House believes that the Israeli military incursion into the Gaza strip was justified.

A large podcast video is located at:
http://www.uvm.edu/~debate/watch/pubdebgazauvm0109.M4V

A smaller .mov file is at:
http://www.uvm.edu/~debate/watch/pubdebgazauvm0109.MOV
Posted by Alfred Charles Snider at 3:27 PM No comments:

This House would prohibit all private health care.

Other teams:
Zagreb Law A
Zagred Law B
Bucharest A

Thanks to Steve Llano of St John's University for the video.
Posted by Alfred Charles Snider at 11:46 AM No comments:

WUDC Finals 2009 - Ban Abortion at all Stages of Pregnancy

This House would ban abortion at all stages of pregnancy

After many votes, it was Oxford A 5-4, and rumor has it that Harvard was second.
Posted by Alfred Charles Snider at 9:15 AM 11 comments:

TH believes that the ICC should prosecute crimes against the democratic process.

Monash B 2O Advances
Manchester A 2G Advances
Princeton A 1G
TCD Phil B 1O
Posted by Alfred Charles Snider at 5:42 AM No comments:

TH believes that the ICC should prosecute crimes against the democratic process.

UCD L&H A 1O
Nottingham A 2G
Oxford A Advances
Oxford B Advances
Posted by Alfred Charles Snider at 5:41 AM No comments:

Seattle A
Helsinki A advances
Victoria Wellington A advances
Auckland A

This House would arm militias to fight the Taliban in Afghanistan.
Posted by Alfred Charles Snider at 5:40 AM No comments:

This House would arm militias to fight the Taliban in Afghanistan.

Posted by Alfred Charles Snider at 5:37 AM No comments:

Debate - BP Testing is the Enemy of Learning

Public debate held at the 2008 Intl Conference in Argumentation, Rhetoric, Debate and Critical Pedogogy, held in April in Ljubljana, Slovenia.