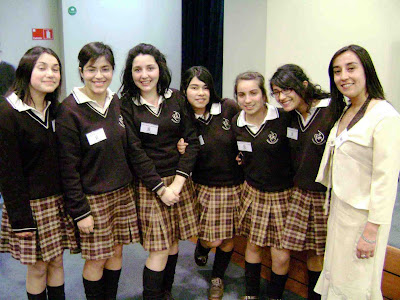 In Santiago, Chile the final round of the national schools tournament took place on Tuesday October 21 2008. It was the conclusion of a long process as 144 schools from all over the nation participated. Regional tournaments were held throughout this geographically diverse nation. The event was sponsored by Universidad Andres Bello, long a leader in promoting debating here.

Four teams made the journey to Santiago for the final day. In the semifinal round the teams of six debated the topic that "Love at first sight is impossible." In this format there are five speeches, the middle ones allowing points of information, and one of the team members specializes in making points of information. The two teams advancing were the Newland School of Santiago and Colegio Sancredo Corazon from Concepcion.

They met in the final round, where the motion was that (loosely translated) in everything we do or say and in all instances we must be true to our principles. Sancredo Corazon was affirmative and Newland School was negative. It was a spirited debate, especially the points of information. The judges were a distinguished panel of citizens (an ambassador, naval officer, journalist) along wth two debate experts, Alvaro Ferrer from Universidad Andres Bello and Max Murath of the Universidad de los Andes. Both of the debate expert judges, by the way, are fellows of the World Debate Institute and have studied there, and Alvaro has also been a faculty member.

The decision was announced among some tension and fanfare, and the winner was Colegio Sancredo Corazon of Concepcion.

48 schools also participated in the English languag version of the tournament which had been concluded earlier.

This was an amazing turnout for Chile. Congratulations to all the schools and especially to the sponsor, Universidad Andres Bello.

The files are large M4V files and may need to be downloaded instead of watched right away.

Finals:
http://www.uvm.edu/~debate/watch/chile1008finals.M4V
Posted by Alfred Charles Snider at 11:35 AM No comments: 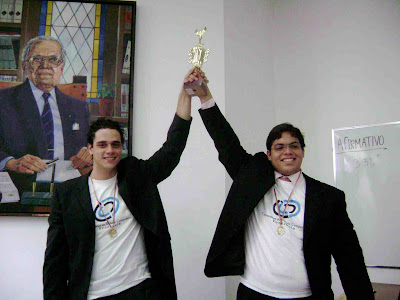 Two rounds from the Venezuela national tournament held in Caracas in October 2008. Both are on the motion that the UN Security Council should only contain non-permanent members. The semifinal debate features UCAB José Ramón Morales y Tomás Hernández vs. USB Jamil Navarro y Pedro Montuenga. The negative, Universidad Simon Bolivar was the winner.

Both debates are in Spanish.

The files are large AVI files and may need to be downloaded in order to be viewed unless you have a lot of bandwidth.
Semifinal
http://www.uvm.edu/~debate/watch/venez08semiusbmnvucabmh.M4V


Thanks to Rita Moncada and Instituto Venezolano de Debates AC for making all of this possible.

Posted by Alfred Charles Snider at 10:12 PM No comments: