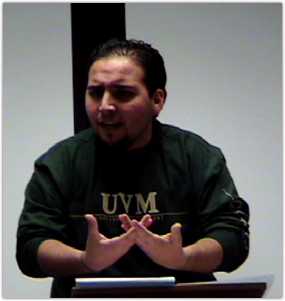 There were six debaters and one trainer from Latin America attending the Parliamentary Debate Workshop at WDI (http://debate.uvm.edu/wdi/ ), and all of them have been working and debating in English.

It was decided shortly after arrival that after these students had learned a lot and improved their performance they would stage a debate in Spanish, a debate that would be videotaped along with a critique in Spanish by Alvaro Ferrer. The video would then be put on the web as well as made available on a DVD. This would be a very useful teaching tool not only for students from Latin America and Spain, but also for the millions of young people in the USA who have Spanish as one of their languages.

The debate was very spirited and dynamic. My faulty Spanish was well challenged, but I could understand enough to follow the major arguments.

The four students were very excited, as were the Spanish-speaking students in the audience. They finally got to show how good they really are in their native language, even though we have been very impressed by their English-language debating.

To see everything in the new videos file, go to
http://www.uvm.edu/~debate/watch/
Posted by Alfred Charles Snider at 9:41 AM